After a weirdly brutal April (we had a historic ice storm mid-month), the weather is finally looking nice, and it feels like spring has finally arrived. I am, as usual, linking up with Leigh Kramer to share some of what I’ve been into this past month.

Since I loved C.J. Redwine’s The Shadow Queen last month I immediately borrowed the next two books in the series (The Wish Granter and The Traitor Prince) from the library and devoured those too. I definitely recommend the series for fans of redone fairy tales. I also really enjoyed Kate Quinn’s The Alice Network, which finally arrived for me at the library and came highly recommended. I’m always a sucker for interweaving past and present (or, in this case, past and more past) storylines. Corine Duyvis’ On the Edge of Gone was really well done, if unnerving near-future dystopia and well worth a read if you like fiction that ponders big questions. I also read Nadia Bolz-Weber’s Accidental Saints as part of an online book club, and it led to some really great conversations about church. As usual, you can see everything I’ve been reading here.

Also, while I haven’t started it yet, I had the delightful experience of finding a book on my to-read list at the thrift store *and* opening it to find the author’s autograph.

This month, when we haven’t been catching up on currently airing shows, Aaron and I have been watching The Goldbergs. We loved it so well that, when we caught up to the present, we just went back and started watching again from the beginning. The combination of 80s references, bizarrely over the top but also sweet family relationships, and occasional glimpses of the real family that inspired the show is so much fun. If, like me, you didn’t really love episode one, stick with it. It gets so much better! It’s also been very exciting to have Corner Gas back with the new Corner Gas animated series, though it’s been jarring to have someone else voice Emma (RIP Janet Wright).

I also cannot say enough good things about the new Netflix movie Come Sunday, featuring Chiwetel Ejiofor as Carlton Pearson, a Pentecostal megachurch pastor in 1990s Tulsa who lost his church after his beliefs on hell changed. It was so well done and compassionate to all the people it portrayed. The scenes between Ejiofor and Jason Segel, who played Pearson’s best friend and ministry partner, were especially well done.

Onstage, we saw two new to us productions this month. The Drayton production of The Drowsy Chaperone was delightful and I have never related to a character as hard as I related to the man in the chair. He listens to musical soundtracks the way I listen to soundtracks. I mean, minus the musings on his acrimonious divorce, but the dramatic facial expressions and the pauses for pedantry are spot on. We also saw the Mirvish production of An American in Paris, and the staging and choreography was delightful, although I’ve never wanted a character to get the girl less. I am very over the whole “guy relentlessly stalks a girl until she falls in love with him” trope.

Musically, April began with Easter, my very favourite part of the church year. The music is so joyful and trimuphant! My church has an annual tradition of ending the Easter service with a mass choir rendition of the Hallelujah Chorus that anyone can join, so I listened to the soprano part on Youtube until I knew it and joined in, and it was such an amazing experience. I can’t think of another line of music that gives me chills as reliably as “the kingdom of this world is become the kingdom of the Lord and of His Christ and He shall reign forever and ever.”

I also found a couple more favourite older CCM CDs at the thrift store this month that have been in heavy rotation: Avalon’s A Maze of Grace and Michael Card and John Michael Talbot’s Brother to Brother.

On Kendra‘s recommendation, I checked out Joseph, a folk-rock sisters trio and really enjoyed their stuff (this link-up has been such a boon for my music collection. I’m pretty sure it’s how I started listening to All Sons and Daughters too.)

Listening to Joseph also reminded me that a lot of people whose music tastes I respected like The Civil Wars (I know, I’m very late to the party), so I decided to check them out as well as Joy Williams’ later solo stuff (I had some of her old stuff from her CCM days, which I liked fine, but wow, this is so much better!)

After watching the Goldbergs so much, we were delighted to find that there is also a Goldbergs Mixtape featuring Erica’s 80s covers and Barry’s raps, and it is amazing.

We celebrated Easter by sharing a potluck with friends, and my contribution was this easy but delicious mini egg brownie trifle.

Easter also meant finding whole lot more mini eggs on sale the next day, so I tried out all manner of cookie, brownie, and blondie recipes to use them up. 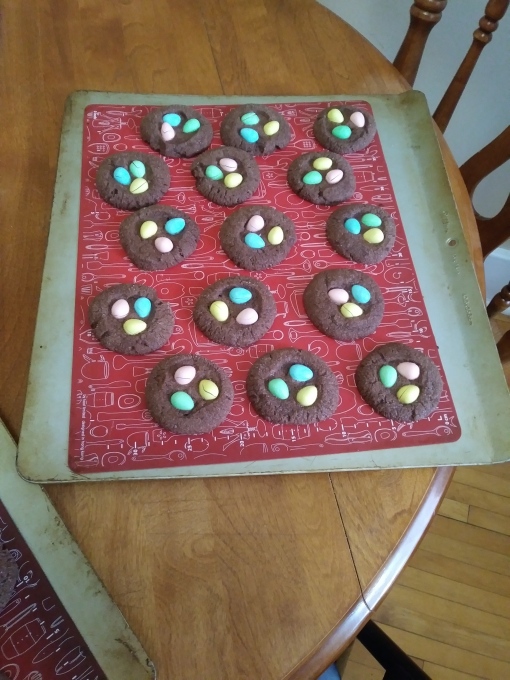 My efforts to cook a new recipe from each of my cookbooks continue apace. On the savoury front, I particularly enjoyed this taco salad in a tortilla bowl and coulibiac (salmon, wild rice, and mushrooms wrapped in puff pastry). 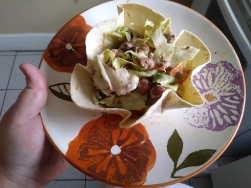 On the dessert front, I was particularly pleased with these tricolour icebox cookies and these pies (margarita pie with a pretzel crumb crust and purple sweet potato pie in a gingerbread crumb crust) 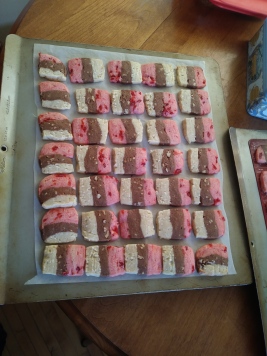 It’s sparser these days because I’m getting so many recipes in print rather than on the Internet, but you can still check out my monthly What I’m Into Pinterest page to see some of my favourite recipes of the month.

I got to try out several new to me games this month and really enjoyed them. Disney Cranium is probably aimed at kids, but still fun for grownup Disney fans (the humdingers were always my favourite part of Cranium, and I know almost all of these). I bought Deck Building: The Card Game mostly for the excellent pun, but it was a lot of fun. Werewords (a cross between Werewolf and 20 Questions) is a good game for a larger group too, although I remain very bad at deceiving people. My favourite new games of the month, though were the two games Aaron and I tried in the Exit series. If you’ve ever been to an escape room, the exit series is an attempt to replicate that in board game form. They are single use only, since once you’ve solved the puzzles you’ve solved them, but they’re a lot of fun, and considerably less expensive than visiting an actual escape room.

I’ve been busily cross-stitching away this month. I actually finished two projects, but the last one is still at the framer’s, so I’ll have to wait for next month to share the picture. I was really pleased with how this Alsatian village scene turned out, especially the backstitching detail on the houses. 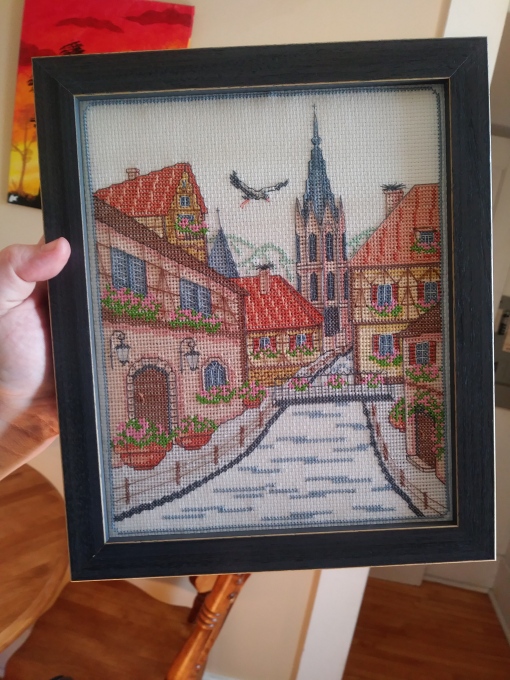 These are some of my favourite funny things I’ve seen on the Internet this month. 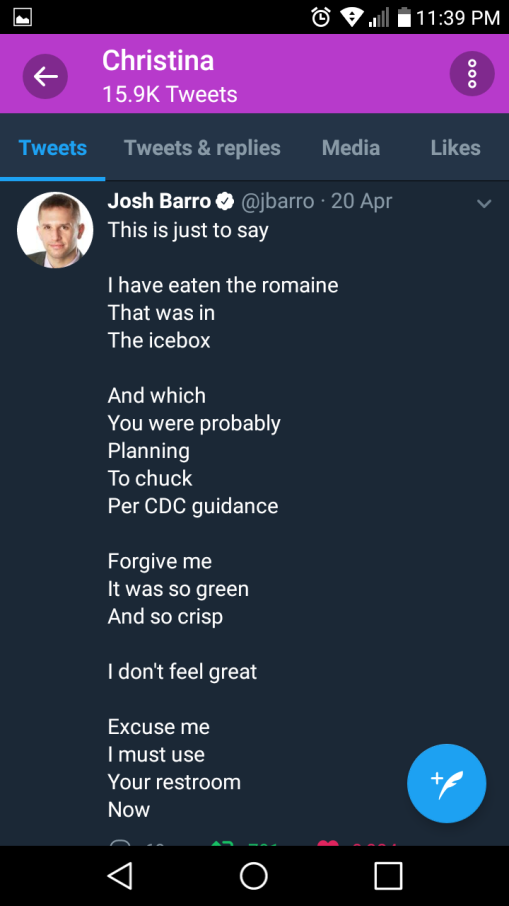 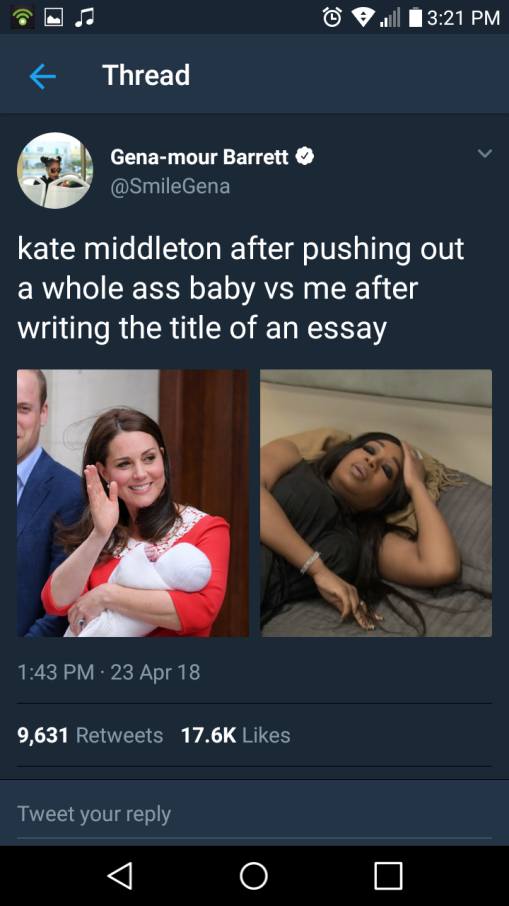 Also, I know I usually prefer to share funny online content and this isn’t that, but this study on the link between religious affiliation and suicide for LGBT people is really sobering, and something that churches need to take very, very seriously.

One of my goals for the year has been to have people over more often, and so far we’ve been averaging hosting about once a week, which has been busy but so much fun. One of the highlights this month was hosting a board game party and cramming about 20 people into our apartment (which, it turns out, is possible. Who knew?).

I also had the pleasure of seeing a friend from my cohort defend her dissertation, and it was great to cheer her on and hear more about her work. Here’s hoping that will be me sooner rather than later.

That’s it for me for the month, be sure to head over to Leigh’s blog to see the other link-up contributions.